This is the first part of an ongoing series reviewing the book “Making Space Happen: Private Space Ventures and the Visionaries Behind Them” (2002), and looking at the achievements in the private space sector that have happened in the subsequent 11 years. I cover the following:

“What would you pay to visit Space?”

That’s the central question of the first major topic in “Making Space Happen: Private Space Ventures and the Visionaries Behind Them“, by Paula Berinstein.

There’s a sure-fire way to get into space: work for a national government as an astronaut (or cosmonaut, or taikonaut). At the time the book was published (2002), only 500 humans had ever been to space! Twelve had landed on the moon, and none had been to Mars.

And virtually every single one of them worked for a national government.

But the book is about the other way into space – the private sector way. It’s an article of faith by seemingly everyone interviewed in the book that Humanity will only truly expand into space when the ordinary public can live and work, and take vacations, in space.

So, space tourism is seen as an important driver to the private space industry’s future expansion.

At the time the book was published, only one human, Dennis Tito, had been to space the private sector way. Working with Space Adventures and the Russian MirCorp, Dennis Tito became the world’s first space tourist. He was able to do this because he had money. It turned out that $20,000,000 USD had amazing anti-gravity properties! What Dennis Tito proved was that there was a market for space tourism, and it could be a very lucrative one.

Paula describes the hard training he went through (750 hours at Gagarin Cosmonauts Training Center in Star City, Russia), and the surprising international wheeling-and-dealing that had to occur (with the involvement of Space Frontier Foundation co-founder Rick Tumlinson) because NASA was very opposed to this first space tourism flight, even though “the Commercial Space Act mandated that NASA bring commercial business into the station whenever possible” (p 403), because they viewed it as a potential mission distraction and danger.

This struggle demonstrates the challenges of public-private missions to space, and the complications of this type of space tourism activity. It faces many technical, legislative, and political challenges, and is incredibly expensive.

“You Must Talk to Tom Rogers”

In one of her chapters, Paula discusses the history of the space tourism industry, from the Hayden Planetarium’s offer to accept reservations for trips to the Moon in the 1950’s (100,000 people quickly signed up), to T.C. Schwartz and Colette Bevis’ space tourism market study in the 1980s.

She also interviews Tom Rogers, who she calls “the granddaddy of space tourism”. He was a physicist and communications engineer who became Chief Scientist of the Space Transportation Association (STA). Sadly, Tom Rogers passed away in 2009.

He was remembered in an obituary by the Washington Post:

“Mr. Rogers expected to be a space tourist himself. He wanted to look down on Earth and contemplate what he was seeing, but a heart attack in 2000 dashed his dream.”

An interesting story related in the obituary confirms something Paula also mentioned. Tom Roger’s quest to promote space tourism faced a strong “giggle factor” in the early years, when the idea of private citizens paying to travel in space sounded ludicrous.

“I have been working hard…to try to make some deep, deep institutional changes in the civil space area…I started to give talks about space tourism because I believe that it could be a large new market.” (p 47).

Paula wraps up the chapter with Tom Rogers by suggesting the following:

“Rogers is lucky to have been in on space tourism from the beginning…His most important points are related to public opinion…[He felt] the only way to build a constituency for space is to give the public personal involvement. (p. 53).

What I think is important in this chapter is the notion that the space tourism industry has been germinating for a long while, driven over a surprising number of decades by evangelists like Tom Rogers, but that without public awareness there will be no market.

“Would You Pay For A Space Vacation?” How many people want to go to the International Space Station (or anywhere else in space) on their vacation? The first space tourism study by NASA and Tom Rogers’ Space Transportation Association was released in 1998, and found the following:

You can read Volume 1 of the study here. The study was important because it put space tourism on the government radar for the first time.

Another widely-read market study was conducted in Japan by Dr. Patrick Collins, which found that 70 to 80% of the public would like to visit space, and would be willing to pay up to 3 months salary.

On the topic of space tourism marketing, Paula Berinstein quotes some typical vacation costs per person (in 2002 dollars):

The point of these estimates is that people will pay a lot of money for their Earth-based vacations. The same applies to space tourism. Space Adventures is well known for lining up trips to space, for tourists like Dennis Tito. A similar company, Incredible-Adventures, offers tours to Star City in Russia, or in a MiG fighter to the edge of space, or even a Russian hydrolab / cosmonaut adventure.

So there’s obviously a large potential market for space tourism and travel.

There are still no destinations in space apart from the ISS, no space hotels (yet), no Moon Station. Space Adventures has announced that they are working on a circumlunar mission to the moon (which wouldn’t land), with a suggested price per passenger of $100,000,000. (source, Wikipedia).

Price tags of $100 M or even $25 M a pop puts any of these trips out of reach of ordinary people. Still, the upper segment of the market, willing and able to pay $25M USD to fly in a Russian rocket and stay on the International Space Station, is now well established.

That can only qualify as a niche market, however.

On this front there has been a great deal of activity – but it has taken longer than expected to put even one passenger into suborbital space.

After the early promise of the X-Prize win it seemed that at any moment a suborbital space plane would be whisking us away to the stars. Year after year there were delays, and today not a single suborbital passenger flight has happened.

We shouldn’t lose heart – orbital and sub-orbital private space flights have to face enormous challenges, including difficulties with insurance, funding, safety, health, and technical issues. Going to space is HARD!

Still, 2014 may be the year the suborbital space tourism market finally blasts off.  Virgin Galactic, XCOR, and Armadillo Aerospace are all in the advanced testing cycles prior to launch suborbital flights, and are getting FAA clearances. Virgin Galactic and XCOR have hundreds of paid deposits from prospective space tourists.  As I write this, space ports are being built in Curacao, New Mexico, and Nevada.

Virgin Galactic White Knight 2 In the Air – by Armchair Aviator

We can hope that twelve months from now, scores of space tourists will have flown and returned from exotic suborbital space adventures, and then the market will truly “be happening”.

John F. Kennedy famously said something that I think applies to the nascent space tourism industry, and its advocates, who choose the adventure of leaving the Earth

“because that goal will serve to organize and measure the best of our energies and skills, because that challenge is one that we are willing to accept, one we are unwilling to postpone, and one which we intend to win.” 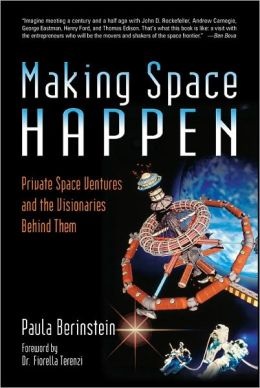 Article Name
"Making Space Happen": Is Space Tourism Happening?
Description
In the book "Making Space Happen" it is suggested that Humanity will only truly expand into space when the ordinary public can live and work, and take vacations, in space. But is space tourism really happening?
Author
Nicholas Kellett
Publisher Name
Onwards and Upwards, by Nicholas Kellett
Publisher Logo