I attended the Canadian Space Summit 2017 in Ottawa Canada on November 21 and 22. The following posts are my rough notes. Disclaimer: I jotted down what I understood but I am likely to get names, comments, and some information wrong. Please contact me if you feel I have misquoted you or otherwise misstated some of the conversations, and I will be happy to set the record straight. You can read my overall impression of the summit here, and my Day 2 notes here. 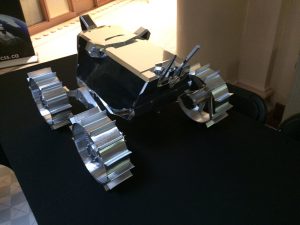 That’s it for my Day 1 notes, since I had to leave and skip the Gala Dinner. My summit notes continue on Day 2.

Summary
Event
​Canadian Space Society Summit 2017
Location
​ University of Ottawa,Ottawa,Ontario
Starting on
2017-11-21
Ending on
2017-11-22
Description
“Canada’s Next Space Generation” will speak to Canada’s future in space and provide a spotlight on the up-and-coming leaders of Canada’s space sector. By highlighting the next generation of industry leaders, space engineers, scientists, and astronauts, the CSS Summit will explore the changing nature of the global space industry and the evolving nature of how we incorporate space into our daily lives. The 17th Annual Summit will provide a venue to discuss upcoming commercial space activities (e.g. space-mining), global trends (e.g. SmallSat constellations in Low-Earth Orbit) and future destinations that are being planned (i.e. Moon, Mars, and Asteroids). The key message of the Ottawa Summit will be, “Canadians are ready for take-off – from building new technologies, leading science missions, creating start-ups or innovative applications, Canadians will be there to push the limits of space”.