After a famously long and convoluted voyage, the European Space Agency (ESA’s) indomitable comet lander Philae descended onto Comet 67P in November 2014, as planned. However, the landing bounces placed Philae in a canyon or crevice where its solar panels couldn’t capture enough light to recharge. After a few days of work its batteries died, but the hopes of its scientists and engineers lived on.

They thought there was a chance that as the comet neared the sun, extra sunlight would power up the lander again – and so it proved when they received new signals earlier today.

Hello @ESA_Rosetta! I’m awake! How long have I been asleep? #Lifeonacomet More details on the mission and revived lander can be found here: http://www.bbc.com/news/science-environment-33126885 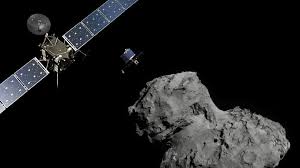