Earlier this week I visited UrtheCast’s booth in the International Astronautical Congress 2014 exhibit hall. The Vancouver-based company is developing a New Space technology that could disrupt any number of Earth-based industries.

I’ve previously blogged on their offering – it is a unique space-based data and software platform which is the forerunner of what I expect to become a space-as-a-service industry sector. I had a great conversation with their Director of Technology Dan Lopez at their booth at IAC and I wanted to further elaborate my thoughts on this technology and what UrtheCast may do with it. Dan explained how their business model works. As the ISS passes over the earth their twin cameras pick up and download large amounts of HD video and photos. I asked if these were big data levels of content and Dan called them “massive data”.

This data is then stored (presumably in an Amazon Web Services cloud) and made available via a RESTFUL  programming API (in non tech-speak this is simply an easy way to allow developers to interact with a software system).

Anyone can consume this data, via a pay-for-use model. A customer can contact UrtheCast and request special data sets. For various fees UrtheCast could provide value-added offerings around the data packages, or prioritize the camera direction and data gathering.

The UrtheCast offering is still in software alpha and therefore subject to extensive NDAs and feature changes. I haven’t had a chance to play with the API yet so what I’m describing here is only my conjecture based purely on conversations, news articles, and press releases.

When you offer a new software service and seek investment you try to have a “big moat” which is a competitive differentiator that competitors would be hard pressed to overcome. UrtheCast has the biggest moat imaginable – literally the gulf of space between the Earth’s surface and their RSC Energia-installed cameras on the International Space Station.

That big moat protects them while they pursue the business opportunities their technology offers them.

After thinking over what I heard, and reviewing my previous post, here are some  additional  opportunities I can forsee:

Anyway those are my thoughts upon seeing them at the IAC conference and I am more convinced than ever that UrtheCast has a disruptive technology on its hands. 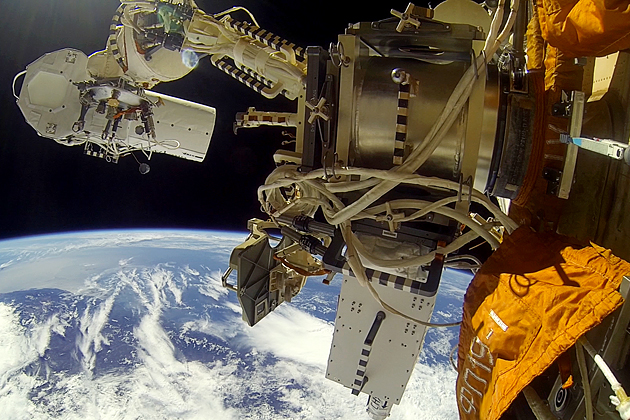