Space Apps Ottawa seemed to be such a far away goal when Ryan Anderson, Arthur Ruff, and I started organizing it in December of last year. Now the event is one week in the past. Hard to believe!

“Developed by NASA and the European Space Agency, challenges focus on real-world design challenges, and on making our planet and universe accessible, visual, and fun to explore. The theme of this year’s event was “Earth” (Earth Science).” (Space Apps Ottawa website)

I suspect the theme choice was a political decision given the possibility that Earth science program funding might be discontinued by the current US government. Regardless of the reason, it provided a very consistent theme and was an opportunity for our participants to consider the importance and potential of space technologies and data to transform the quality of life on Earth.

In addition to the official NASA/ESA challenges, our own Canadian Space Agency released two Challenges for the Canadian Space Apps events. These challenges were related to Canada’s historic Alouette and the upcoming RCM constellation of earth-observing satellites.

Our event was hosted at Shopify’s downtown Ottawa headquarters. Shopify was the perfect creative place for us to host, they even had a wonderful mural right at the doorway that couldn’t have fit better for our event! My thanks to Shopify rep Samantha and her team of volunteers, Sam Laura, and Matt, who were amazing to deal with and even gave up their weekend to ensure our event was supported and went well.

Shopify was one of many organizations, including the Canadian Space Society and my own company, Deploy Software Solutions, that provided logistical, marketing, and financial assistance to our fledgling event. Without such sponsorship we could never have held it. 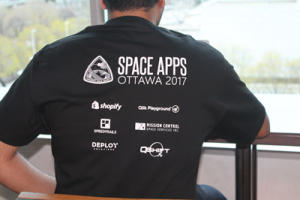 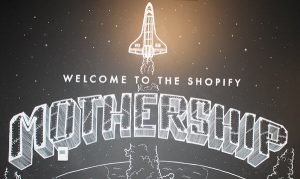 We also benefited from great mentors and volunteers, who registered the participants, and helped them throughout the weekend, acting as sounding-boards and providing vital space-industry experience and skills to help the teams enhance their solutions and presentations. It was wonderful to see the mentors chatting with our participants, working through ideas using sticky notes on the wall, figuring out complex math formulas such as the position of the sun in the sky on different planets, or discussing ways to maximize the living spaces in future habitats.

Here are a few of them in action: 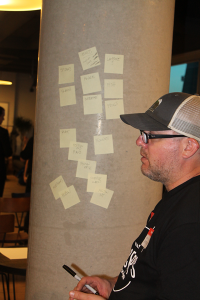 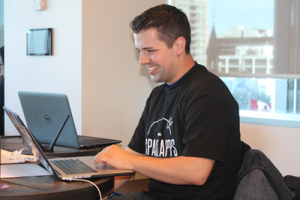 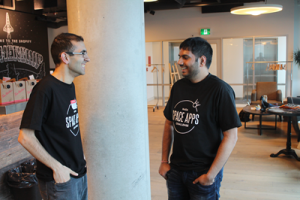 Thanks so much to Rey, Ewan, Kaizad, Hooman, Maykel, Cory, Sandeep, Chris, Wolf, Diana, and David for volunteering their time to provide mentoring, and on a weekend no less!

Although this was Ottawa’s first year hosting the event, Waterloo and Toronto have been hosting Space Apps challenges for at least a couple of years. We benefited enormously from the help of James Slifierz and James Costa, the respective organizers of those cities, as well as the NASA Global Lead team which provided materials and guidance we could use.

All weekend, we would tweet about our progress, and in return we’d see videos and tweets from organizers and participants all over the world. There were pictures of people in each different time zone, working hard, and always with big smiles (unless they happened to be caught napping – this was a 48-hour event after all).

The Participants and their Solutions All of the sponsors, volunteers, and mentors helped make the event memorable and fun – but most of all credit goes to our participants who worked tirelessly and cheerfully all weekend to create their solutions. It was amazing how calm they all were – we would drop by to ask if they needed help and they rarely did – but we would overhear them talking about test runs at 2 am.

The solutions they produced in such a short amount of time were incredible: a prototype website consuming complex data sets from Canadian satellites; two machine learning solutions that could identify similar and dis-similar mosquito genomes or bird photos and place them on a map; a 3d design of space-conscious habitats; a user-friendly website explaining the impact of solar power consumption from common household appliances; and a roller-coaster satellites-eye view of the earth. 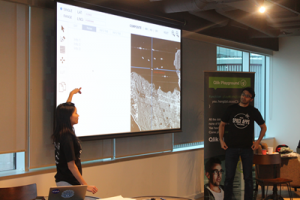 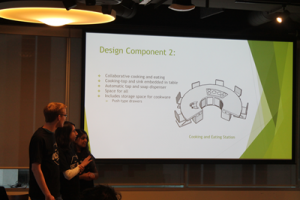 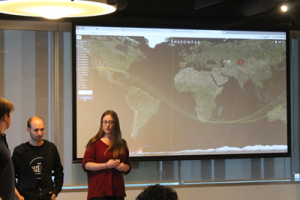 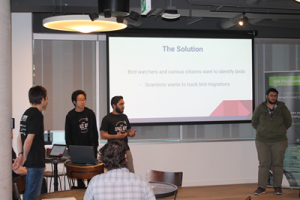 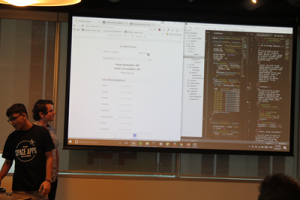 On Sunday we held judging, which is part of the NASA process to select promising solutions from across the globe.

Our three judges had extensive backgrounds in government funding for aerospace projects, venture capital and board membership, and banking and space-sector knowledge. They were able to ask about the feasibility of the various projects, and whether the teams foresaw opportunities to enhance their solutions.

Although it was their task to select only a few projects for global judging, they were surprised by how much all of the teams had accomplished in only 48 hours, and found it very difficult to make their selection from so many promising options.

After the weekend was over, there was still some work to do – for the organizers as we tied up some loose ends, and from Mission Control Space Services which contributed their time to help the selected teams with preparing a 30-second video showcasing their projects, to assist with the NASA and CSA selections. You can see their final video presentations here:

Congratulations to all of our Ottawa Teams! 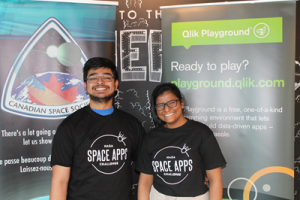 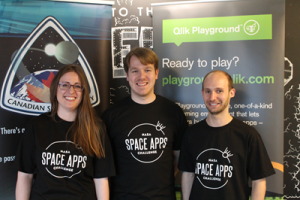 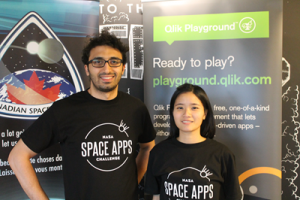 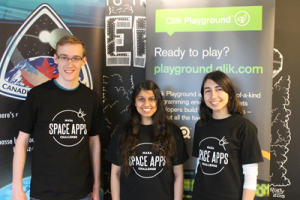 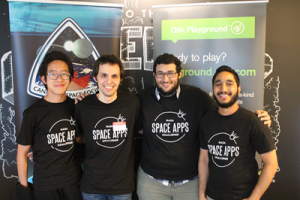 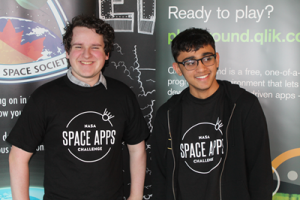 Some of our participants have been to hackathons before, but the format was an eye-opener for most of us, myself included. We had lots of conversations about ways to leverage it to enhance Canada’s space sector, and even encourage the use of more hackathons in Canadian government organizations, and private companies.

It is amazing how much can be accomplished in such a short amount of time. Each team was able to self-organize, bond, collaborate, and present working prototype solutions to some very ambitious challenges. Each team had lots of ideas for future improvements, and also discovered some things that didn’t work.

In terms of standard software research and development time, this sort of focused effort is very “cheap” and can be repeated many times to explore and discard potential solutions in a creative and liberating way. Hackathons are becoming much more popular – in fact that weekend Shopify Ottawa was hosting another one simultaneous to ours, for people hacking on health care solutions for the local hospitals.

I was told about a good website listing major hackathons in North America, Major League Hacking, and next year we will submit ours to that. Overall, I feel like this year’s event was a great success, and am personally thrilled at how it turned out.

We are already speaking with many interested parties including the other two Canadian cities that participated, in the hopes of a creating a “Space Apps Canada” brand for future years. A national organization would increase the available support and awareness, and hopefully reduce the organizing burden for each city. We hope to widen the attendance, encourage other Canadian cities to participate, and include part-time participants and interested people via live-streaming.

Finally, my utmost thanks to Arthur and Ryan for their co-organizing efforts – planning this event was co-operative and never stressful, and it’s always a good sign when even the organizers are relaxed and enjoying themselves!